The Boys who ran away to New York.

In 1985 two boys from Darndale in Dublin, Keith Byrne (10) and Noel Murray (13), both made headlines around the world when they hopped on a Dart and ended up in New York escaping authorities in three countries.

Keith Byrne said that he and his friend went to the United States because he wanted to see his favourite television star, B A Baracus, of The A-Team.

Their adventure started when they went out to play before dinner time, Keith said in an RTÉ Radio documentary broadcast last month: “My mum said: ‘don’t go far, your dinner’s nearly ready,’ ”he recalled. “I said: ‘I won’t.”

But they did. They took the Dart to Dún Laoghaire and snuck on to a ferry to Holyhead. Emboldened by their success, they avoided the ticket checkers and got on a train to London. Eventually they wound up at Heathrow airport with nothing but a few coins they’d nicked from a charity fountain.

Once there they asked a random passenger where his plane was going and he told them New York. They told the ticket checker and security their parents were behind them, and boarded an Air India plane.

“The plane was only half full so no one came near us,” he said. Their ease at slipping past the authorities was even more surprising given the fact that, two months earlier, an Air India jet had blown up off the southwest of Ireland, killing 329 people.

Byrne recalled being unable to eat a very hot Indian curry and watching the James Bond film A View To A Kill.

Their journey came to an end when they left JFK airport and asked a policeman for the way “into town”. They were taken to a police station where they immediately became the centre of attention. Authorities were taking no chances and they were put in a hotel suite with five security guards. “There was BLTs, chips, everything, fed us like lords. We loved it,” Keith said.

Their exploits made the front page of the New York newspapers.

Keith Byrne is now 43 and Noel Murray is 46. Both live in Darndale. 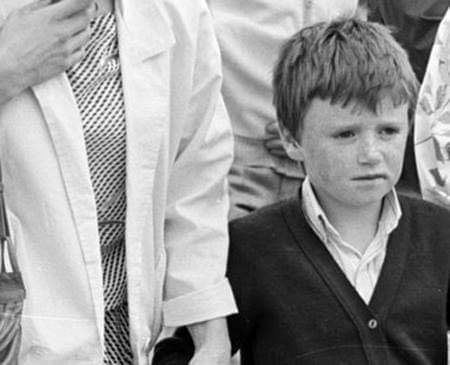